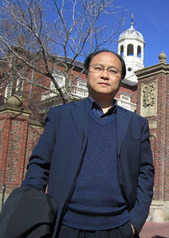 He was born in Changsha, Hunan Province. Currently, he serves as a professor and doctoral supervisor in the School of Physics and director of the Institute of Biophysics at Nanjing University. He was elected into the Changjiang Scholars Program in 1999 (in the field of theoretical physics). He was awarded the National Fund for Young Scholars in 1996. He was also the chief scientist in the “Nonlinear Science and Its Application Project (2007-2011)” and “Nonlinear Dynamic Spot Maps and Orbital Stability Studies Related to Laser Fusion, Natural Disasters and Deep Space Exploration (2013-2017)”, both funded by the National Basic Research Program of China (973 Program) led by the Ministry of Science and Technology.

1. Dynamics of protein folding and aggregation and microstructures and characteristics of biomolecules assembled through complex intermolecular interactions;

His research work involves the dynamic characteristics of condensed matter physics, statistical physics, and soft condensed matter physics system. In recent years, he focuses on the dynamical properties of the biomolecular systems’ folding, aggregation and functional movement, on the assembled microstructure of interacting biomolecules and on the related problems about the dynamic charateristics of signal communication within the biological network systems. He has published more than 180 academic papers in international academic journals, including PRL, NSB, PNAS, JACS, and other journals. At present, he is undertaking projects funded by the National Basic Research Program of China (973 Program) under the Ministry of Science and Technology and by the National Natural Science Foundation of China.

The 7th Science and Technology Award for Chinese Youth (2000)